UK ‘altnets’ risk digging themselves into a hole

Underneath the UK’s streets, a billion-pound race is taking place. In many towns and cities, at least three companies are digging to lay broadband fibre cables all targeting the same households, with some areas predicted to have six or seven such lines by the end of the decade.

But only some of them will cross the finishing line.

Encouraged by incumbent telecoms group BT dragging its heels over upgrading old copper lines to fibre optic technology, dozens of smaller alternative networks — or “altnets” — have popped up over the past decade with the goal of laying fibre as quickly as possible.

Their bet, shared by some of the biggest names in private equity, is that the ultrafast broadband they offer will allow them to poach frustrated customers. More than 50 altnets of varying sizes and ambitions have secured about £15bn from private investors and banks, including KKR, Macquarie, Warburg Pincus, Goldman Sachs and Antin Infrastructure Partners.

The question now is how this market will finally shake out, and which of these companies will be able to secure enough customers to stay afloat.

When the dust settles, will there be just two network operators — with Openreach and Virgin Media O2 dominating the landscape — or is there space for a sparky challenger with significant market share stolen from the incumbents?

“A lot of these business models were created on the assumption that if there was an altnet there, Openreach would not overbuild them,” said James Barford, an analyst at Enders Analysis. “That has turned out to be wrong.”

For their business models to be economically viable, each of the altnets needs to capture about 40 per cent market share in the locations they are digging, according to industry estimates, either by selling broadband contracts to consumers directly or wholesaling to internet service providers such as Vodafone, TalkTalk and Sky.

No altnet has yet turned a steady profit, although the biggest — CityFibre — says it will by next year.

“If you add up all of the activity — all of the planned activity — not many of these companies will make enough money to survive. It’s just not possible,” said Philip Jansen, chief executive of BT.

The glaring challenge is that BT’s networking division Openreach has rapidly accelerated its fibre build, moving much faster than most of these opportunistic companies anticipated.

Meanwhile, rising interest rates and higher energy and labour prices, caused in part by the Russian offensive in Ukraine, have changed the cost forecasts for many of these groups, which are already shouldering heavy annual losses.

Openreach is spending about £12bn to reach 25mn homes by the end of 2026, and thinks it could realistically reach 97 per cent of UK premises by 2030. Virgin Media O2 has committed £2bn to upgrading its copper network to a fibre-copper hybrid offering for about 15.5mn premises by 2028, and is trying to secure a joint venture to build full-fibre lines for an additional 7mn homes.

Their customers can also be pretty “sticky” — reluctant to change providers unless they are offered material discounts or a much better service.

Andrew Lee, an analyst at Goldman Sachs, said that last year he had been “nervous around the overbuild risk for BT” but now the war in Ukraine was creating fresh pressure. “Some of these guys are running with their laces tied because of supply and labour force bottlenecks,” he added, noting that increased costs were altering the long-term returns that altnets could offer their investors.

To compound those issues, operators are also facing a global shortage of fibre optic cable, with lead times and prices having risen considerably in the past few months.

The price of fibre per cable kilometre has risen by as much as 25 per cent because of increased raw material and logistics costs, according to Ankit Agarwal, managing director of STL, the largest fibre supplier in Britain.

“Logically you want to give your best terms and delivery times to your largest customers,” he said. “We give first preference to BT and Virgin Media.”

But not all industry insiders and investors are so sceptical of the challengers’ prospects.

UK altnets have now passed a total of 5.5mn premises with fibre broadband, compared with 7.6mn passed by Openreach and about 2mn by Virgin Media O2. They have doubled their build speed year on year and now have more than 1mn customers, according to the latest report by the independent network industry association and Point Topic, an analyst firm.

On the surface, there is little evidence that investment from private equity, banks and investors is coming to an end.

This month CityFibre secured £4.9bn in debt finance from a consortium of banks, while in May a new outfit called Freedom Fibre was promised £100mn from infrastructure investor Equitix and Santander.

However, one major altnet investor admitted that “money is flowing, but less than it was”.

“There is a flight to quality now,” they added, pointing to the fact that some recent capital raises have “struggled quite a bit”.

Companies with an attractive business, the bulls argue, are those that have selected locations that other players have not yet reached, are building fast and cheaply, and are able to offer competitive pricing to customers.

As Ollie Perry, a partner at consulting firm Oliver Wyman, put it: “If I’m the CEO of the company that’s the sixth overbuilder, I don’t think I’d be in the job very long.”

He added: “There is absolutely room for different operators — there isn’t room for several operators connecting to the same building.”

Several industry insiders point to Hyperoptic, backed by KKR, as an example of a solid business model. The company targets areas with large densities of apartment blocks, where it can reach more customers at lower costs, and has now reached 1mn homes and signed up 230,000 customers — more than any other altnet.

Meanwhile, Community Fibre, a London altnet, has signed a wholesale agreement with TalkTalk across the capital, according to two people briefed on the deal. G.Network, by contrast, has passed 400,000 homes and signed up 55,000 customers, a 12.5 per cent take-up rate to date. 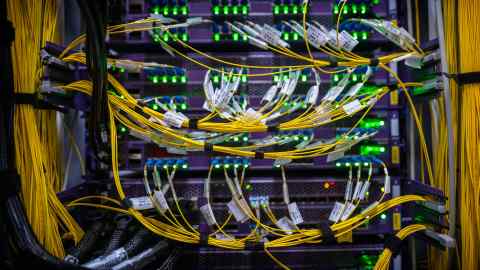 Despite some successes, it is widely predicted that many of the smaller companies will either go bust or be bought out by competitors, as cable companies were in the 1990s. The first casualty was People’s Fibre, a company building on the Welsh border, that went into administration late last year.

In a sign of the appetite for consolidation, Community Fibre has been approached by several companies interested in either acquiring or merging with the company, including CityFibre, Hyperoptic and G.Network, according to people briefed on the discussions.

Greg Mesch, chief executive of CityFibre, said he “believes deeply” that there will ultimately be a third national network, which he argued would also be more healthy for the UK.

Dana Tobak, chief executive of Hyperoptic, said her team was still mulling a wide range of future scenarios, including whether to grow into a bigger internet service provider, buy up other altnets or sell the business altogether — but right now there was too much “illogical” money flooding the sector to work out which businesses will actually survive.

“For me, the question is: when will the era of rationality return to the market?” she said, adding that she expected that to become “more of a factor in the next one to two years as debtors recognise the importance of customers and revenue along with aggressive build maps”.

As the Re:WIRED GREEN event on addressing climate change drew to a close yesterday, the weather underlined the urgency in

CNN  —  President Joe Biden is hosting the first ever US-Pacific Island Country Summit this week, a multi-day event in