Phantom surge in Berkshire trading caused by brokers like Robinhood

Three academics on Wednesday offered a startling answer: trading volumes in the most expensive stock in the US was and continues to be artificially inflated by the way brokers such as Robinhood report fractional share trading.

In a new research paper, professors at the University of California, Berkeley, Columbia University and Cornell University said they had uncovered what they described as “phantom, non-existent trading”.

The jump in publicly reported trading volumes for Berkshire and other companies has been driven up by the rise in fractional trading and rules from Finra, Wall Street’s self-regulatory body, which direct brokers to round those fractional stock trades — regardless of how small — up to a single share.

That rounding-up has meant that the boom in fractional share trading — where a customer can buy or a sell a sliver of a single stock — has inflated reported trading volumes across the US stock market.

And it has had a particularly outsized effect on Berkshire class A common stock, which is thinly traded and has commanded a price above $500,000 a share this year. No publicly traded stock in the US commands a higher price, according to Refinitiv data.

The jump in trading volumes in Berkshire first appeared in February 2021, when Robinhood began reporting the transactions, the study found. While the brokerage, which has helped popularise fractional trading, had offered trading in less than one-share increments since 2019, it did not initially report the trades to the Finra database that records off-exchange transactions.

The company was later informed by Finra that it should report those trades and began to do so at start of 2021.

In October, DriveWealth, which processes stock trades for digital banking start-ups Revolut and Cash-App, also began reporting fractional share trades in Berkshire to the Finra database, the study found. The professors said they were able to isolate reported trades from Robinhood and DriveWealth based on the slight time delays it takes each to publish buy and sell orders.

Daily volume in the class A stock averaged about 357 shares a day in the two years before Robinhood began reporting fractional transactions. Since then, activity appears to be more than five times that level, with nearly 1,900 shares changing hands a day, according to Bloomberg.

The uptick in volumes created confusion in the market, given Berkshire chief executive Warren Buffett himself had previously lamented how hard it was to find willing sellers of the company’s class A stock for its stock repurchase programme.

“If our shares were heavily held by short-term speculators, both price volatility and transaction volumes would materially increase,” Buffett wrote to shareholders in his annual letter this February. “That kind of reshaping would offer us far greater opportunities for creating value by making repurchases.”

The findings on Wednesday challenge speculation that the uptick in trading over the past year was driven by a foreign buyer or trader who would not have to disclose the transactions. 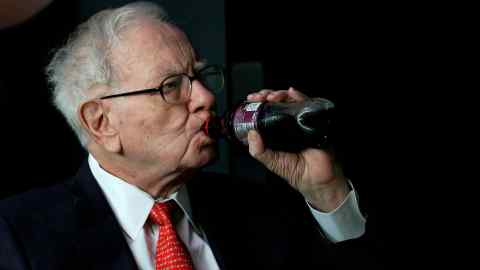 Finra said it was “already actively working on the issue, and is engaged in ongoing discussions with firms and regulators. The current trade reporting systems (other than the Consolidated Audit Trail) do not support the entry of a fractional share quantity.”

While the public would not have known that the fractional trades were erroneously inflating volume figures, regulators with access to the Consolidated Audit Trail — a system that tracks US stock trading — would have understood that the trades were for the most part minuscule in size.

Berkshire, Robinhood and DriveWealth did not respond to requests for comment.

Democrats are warming to a Biden 2024 campaign. They’re just not sure if he’ll run.

The mood has notably shifted among top Democrats in recent months. During the depths of Biden’s political struggles in March,

How to Back Up Your Digital Life (2022): Hard Drives, Cloud-Based Tools, and Tips

The hardest thing about this step is figuring out which hard drive to buy. If you want something small, see