Arctic permafrost is thawing rapidly. It affects us all

Four years ago, Morris J. Alexie had to move out of the house his father built in Alaska in 1969 because it was sinking into the ground and water was beginning to seep into his home.

“The bogs are showing up in between houses, all over our community. There are currently seven houses that are occupied but very slanted and sinking into the ground as we speak,” Alexie said by phone from Nunapitchuk, a village of around 600 people. “Everywhere is bogging up.”

What was once grassy tundra is now riddled with water, he said. Their land is crisscrossed by 8-foot-wide boardwalks the community uses to get from place to place. And even some of the boardwalks have begun to sink.

“It’s like little polka dots of tundra land. We used to have regular grass all over our community. Now it’s changed into constant water marsh.”

Thawing permafrost — the long-frozen layer of soil that has underpinned the Arctic tundra and boreal forests of Alaska, Canada and Russia for millennia — is upending the lives of people such as Alexie. It’s also dramatically transforming the polar landscape, which is now peppered with massive sinkholes, newly formed or drained lakes, collapsing seashores and fire damage. 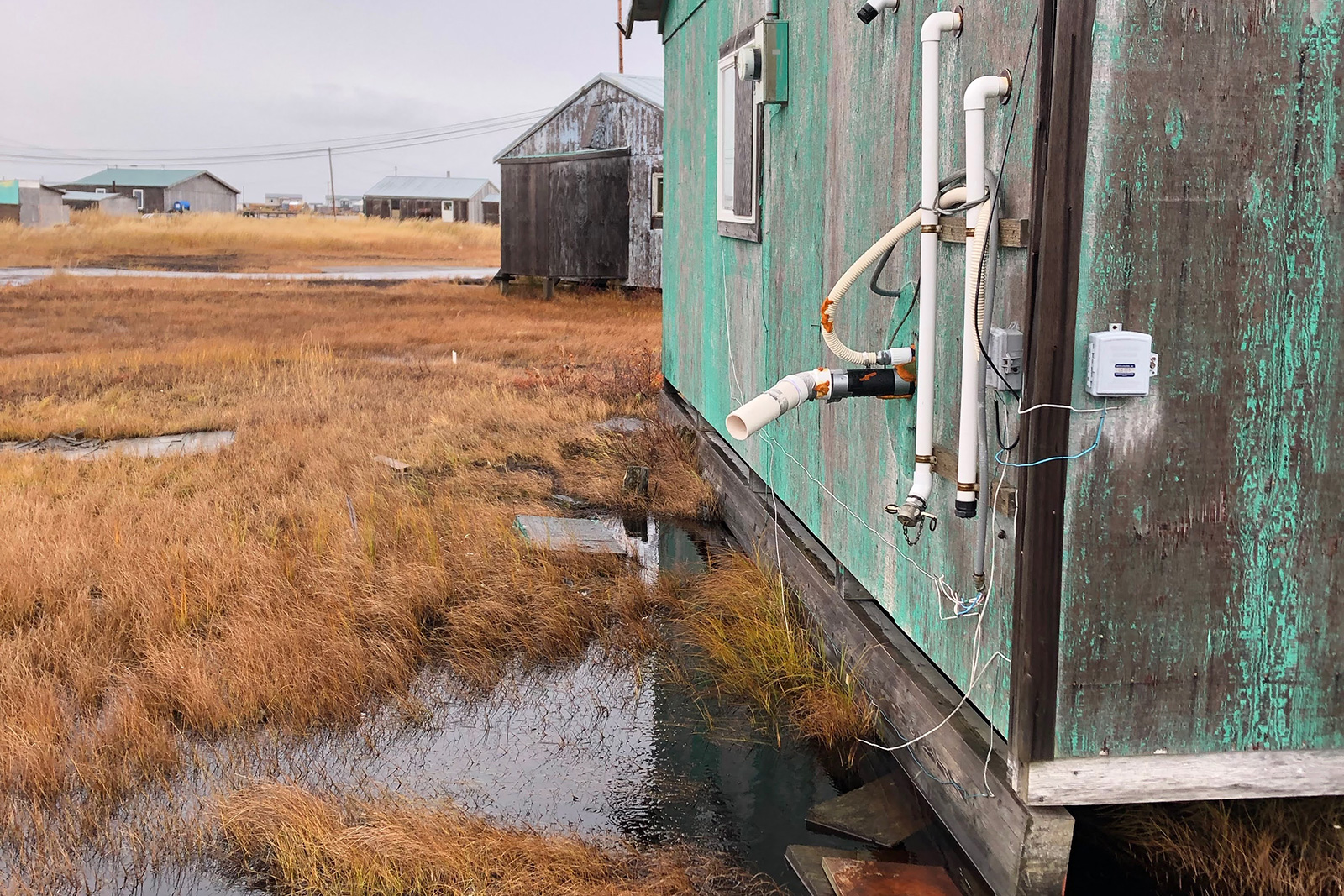 It’s not just the 3.6 million people who live in polar regions who need to be worried about the thawing permafrost.

Everyone does – particularly the leaders and climate policymakers from nearly 200 countries now meeting in Egypt for COP 27, the annual UN climate summit.

The vast amount of carbon stored in the northernmost reaches of our planet is an overlooked and underestimated driver of climate crisis. The frozen ground holds an estimated 1,700 billion metric tons of carbon – roughly 51 times the amount of carbon the world released as fossil fuel emissions in 2019, according to NASA. It may already be emitting as much greenhouse gas as Japan.

Permafrost thaw gets less attention than the headline-hogging shrinking of glaciers and ice sheets, but scientists said that needs to change — and fast.

“Permafrost is like the dirty cousin to the ice sheets. It’s a buried phenomenon. You don’t see it. It’s covered by vegetation and soil,” said Merritt Turetsky, director of the Institute of Arctic and Alpine Research at the University of Colorado Boulder. “But it’s down there. We know it’s there. And it has an equally important impact on the global climate.”

It’s particularly pressing because Russia’s invasion of Ukraine has stopped much scientific cooperation, meaning a potential loss of access to key data and knowledge about the region.

Warmer summers — the Arctic is warming four times faster than the global average — have weakened and deepened the top or active layer of permafrost, which unfreezes in summer and freezes in winter.

This thawing is waking up the microbes in the soil that feast on organic matter, allowing methane and carbon dioxide to escape from the soil and into the atmosphere. It can also open pathways for methane to rise up from reservoirs deep in the earth.

“Permafrost has been basically serving as Earth’s freezer for ancient biomass,” Turetsky said. “When those creatures and organisms died, their biomass became incorporated into these frozen soil layers and then was preserved over time.”

As permafrost thaws, often in complex ways that aren’t clearly understood, that freezer lid is cranking open, and scientists such as Turetsky are doubling efforts to understand how these changes will play out. 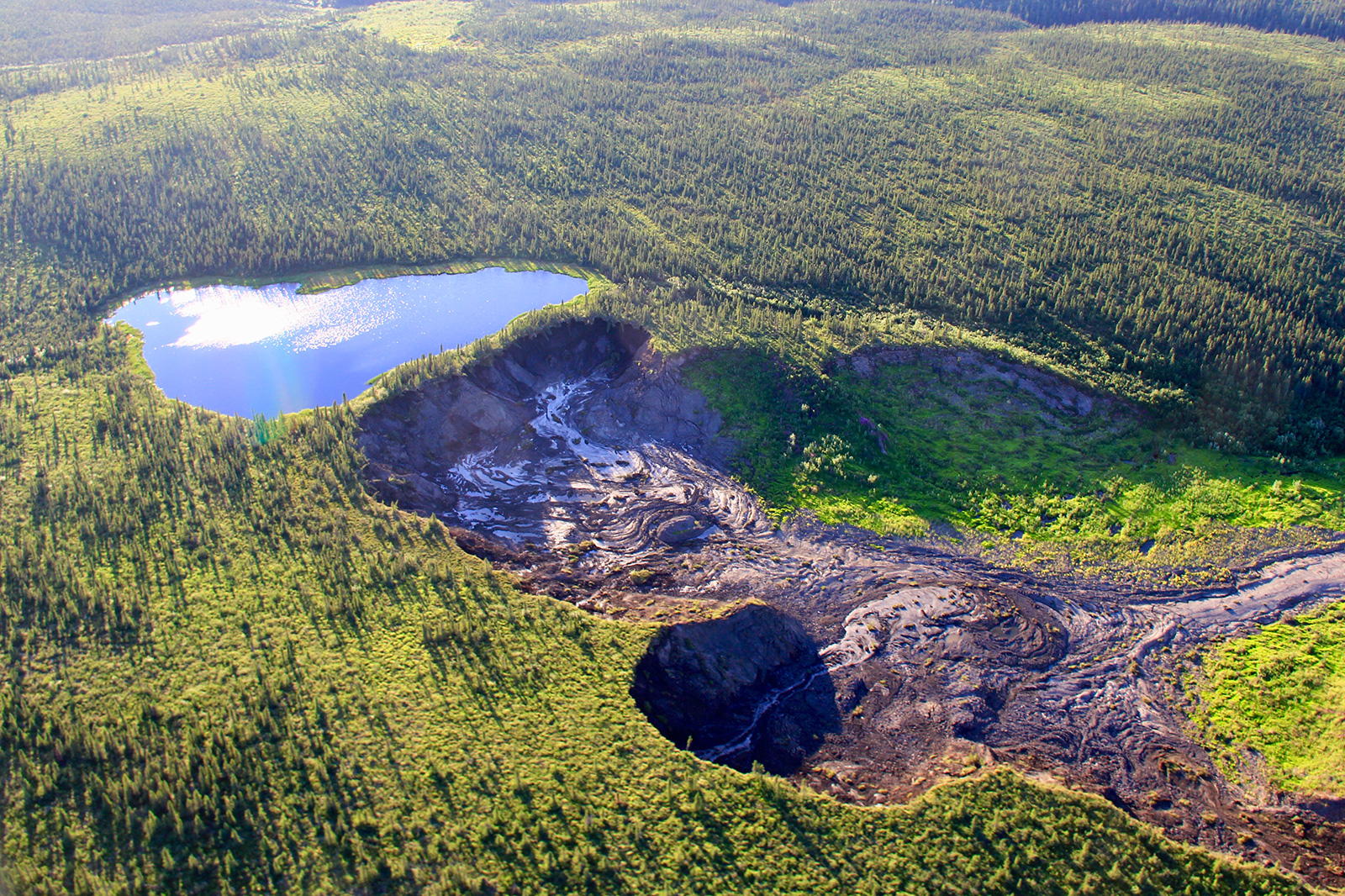 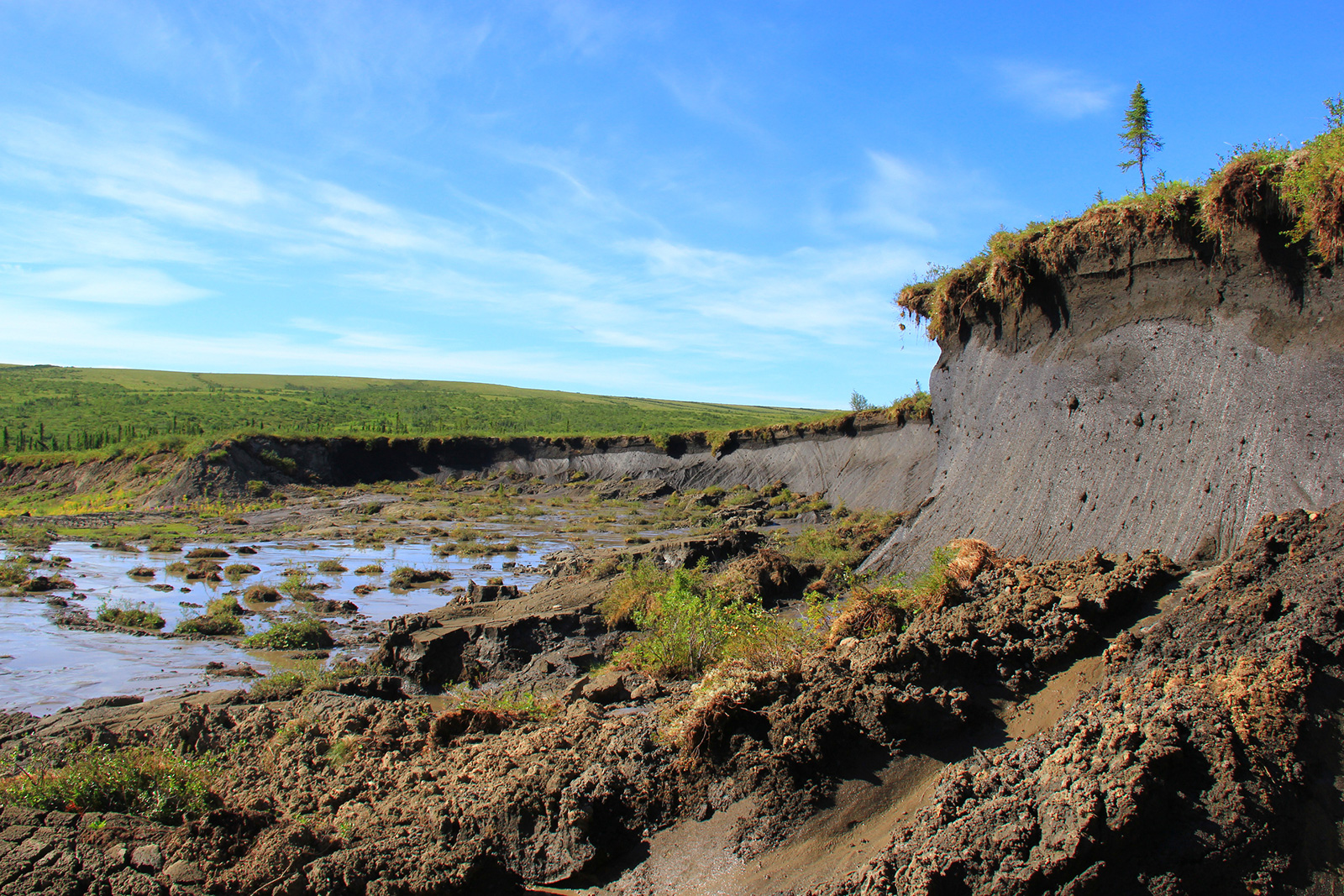 “There’s some scientific uncertainty of how large that country is. However, if we go down a high emissions scenario, it could be as large or larger than the United States,” said Brendan Rogers, an associate scientist at the Woodwell Climate Research Center in Massachusetts.

He described the permafrost as a sleeping giant whose impact wasn’t yet clear.

“We’re just talking about a massive amount of carbon. We don’t expect all of it to thaw … because some of it is very deep and would take hundreds or thousands of years,” Rogers said. “But even if a small fraction of that does get admitted to the atmosphere, that’s a big deal.”

Projections of cumulative permafrost carbon emissions from 2022 through 2100 range from 99 gigatons to 550 gigatons. By comparison, the United States currently emits 368 gigatons of carbon, according to a paper published in September in the journal Environmental Research Letters.

Not all climate change models that policymakers use to make their already grim predictions include projected emissions from permafrost thaw, and those that do assume it will be gradual, Rogers said.

He and other scientists are concerned about the prevalence of abrupt or rapid thawing in permafrost regions, which has the power to shock the landscape into releasing far more carbon than with gradual top-down warming alone.

The traditional view of permafrost thaw is that it’s a process that exposes layers slowly, but “abrupt thaw” is exposing deep permafrost layers more quickly in a number of ways.

For example, Big Trail Lake in Alaska, a recently formed lake, belches bubbles of methane — a potent greenhouse gas, which comes from thawing permafrost below the lake water. The methane can stop such lakes from refreezing in winter, exposing the deeper permafrost to warmer temperatures and degradation.

Rapid thawing of the permafrost also happens in the wake of intense wildfires that have swept across parts of Siberia in recent years, Rogers said. Sometimes these blazes smolder underground for months, long after flames above ground have been extinguished, earning them the nickname zombie fires.

“The fires themselves will burn part of the active layer (of permafrost) combusting the soil and releasing greenhouses gases like carbon dioxide,” Rogers said. “But that soil that’s been combusted was also insulating, keeping the permafrost cool in summer. Once you get rid of it, you get very quickly much deeper active layers, and that can lead to larger emissions over the following decades.”

Also deeply concerning has been the sudden appearance of around 20 perfectly cylindrical craters in the remote far north of Siberia in the past 10 years. Dozens of meters in diameter, they are thought to be caused by a buildup and explosion of methane — a previously unknown geological phenomenon that surprised many permafrost scientists and could represent a new pathway for methane previously contained deep within the earth to escape.

“The Arctic is warming so fast,” Rogers said, “and there’s crazy things happening.” 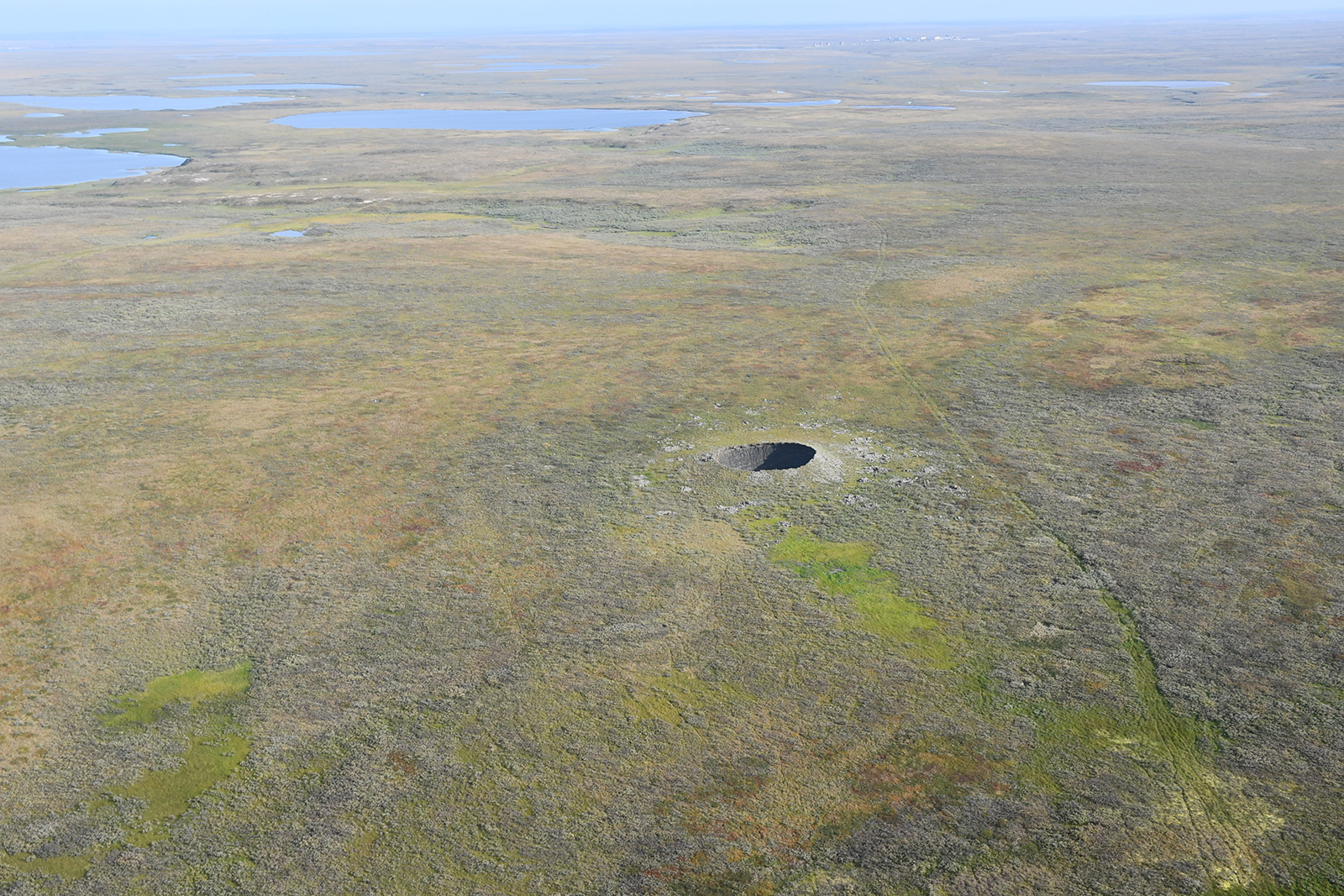 Craters have appeared in the remote far north of Siberia in the past 10 years. (Evgeny Chuvilin/Skoltech) 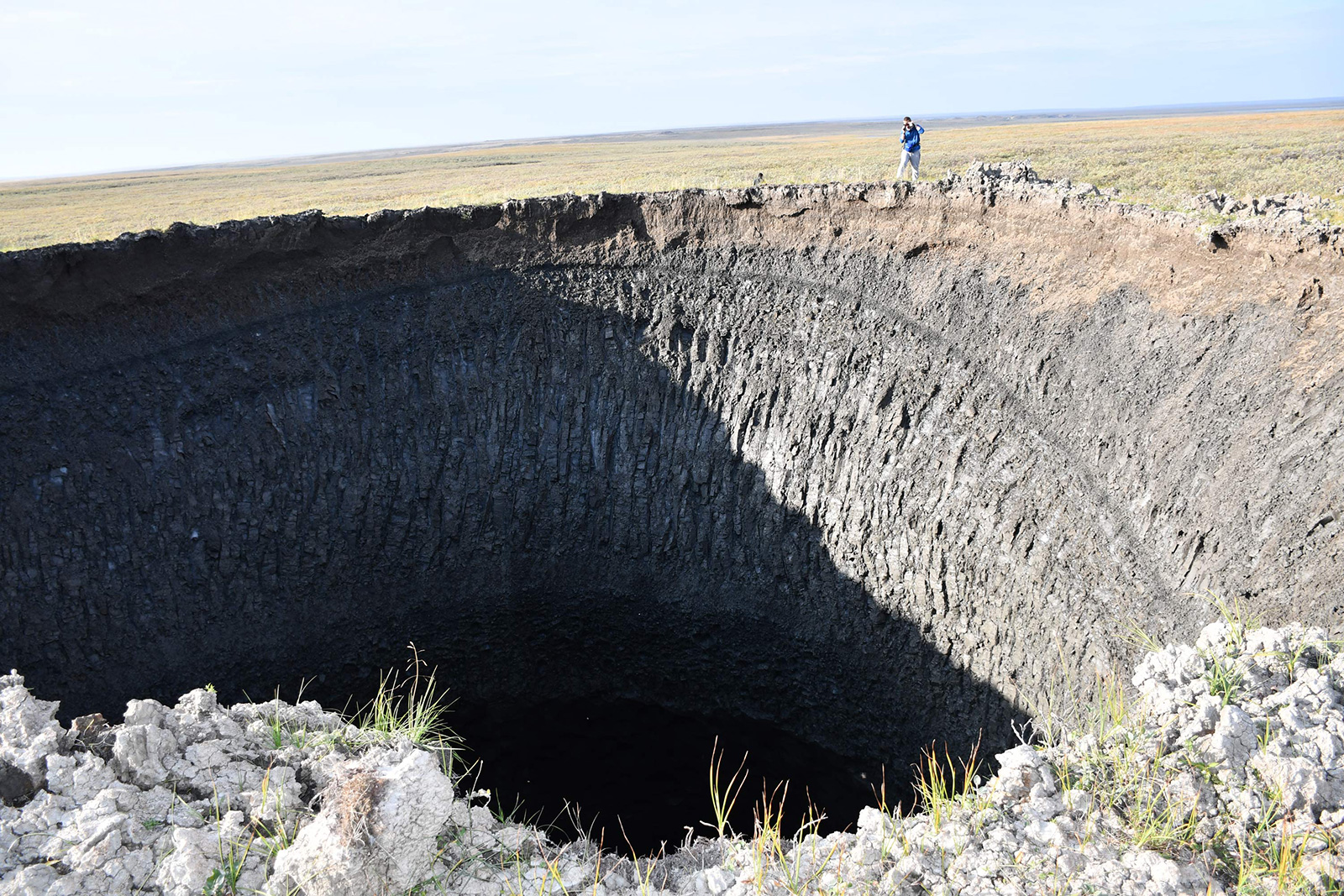 The craters are thought to be caused by a buildup and explosion of methane — a previously unknown geological phenomenon. (Evgeny Chuvilin/Skoltech)

A lack of monitoring and data on the behavior of permafrost, which covers 15% of the exposed land surface of the Northern Hemisphere, means scientists still only have a patchwork, localized understanding of rapid thaw, how it contributes to global warming and affects people living in permafrost regions.

Rogers at the Woodwell Climate Research Center is part of a new $41 million initiative, funded by a group of billionaires and called the Audacious Project, to understand permafrost thaw. It aims to coordinate a pan-Arctic carbon monitoring network to fill in some of the data gaps that have made it difficult to incorporate permafrost thaw emissions into climate targets.

The project’s first carbon flux tower, which tracks the flow of methane and carbon dioxide from the ground to the atmosphere, was installed this summer in Churchill, Manitoba. However, plans to install similar monitoring stations in Siberia are in disarray as a result of Russia’s invasion of Ukraine.

“It’s always been more challenging to work in Russia than other countries … Canada, for example,” Rogers said. “But this (invasion), of course, has made it exponentially more challenging.”

Sebastian Dötterl, a professor and soil scientist at ETH Zurich, a Swiss university, who studies how warmer air and soil temperatures change plant growth in the Arctic, was able to travel to the Norwegian archipelago of Svalbard in the Arctic this summer to collect soil and plant samples.

However, the field trip cost twice as much as initially budgeted because the group was forbidden to use any Russia-owned infrastructure, forcing the team to hire a tourist boat and reorganize its itinerary. But Dötterl said the more pressing issue is that he can no longer interact with his counterparts at Russian institutions.

“We are now splitting a rather small community of specialists all over the world into political groups that are disconnected, where our problems are global and should be connected,” he said.

Turetsky agreed, saying that the war in Ukraine had been a “disaster for our scientific enterprise.”

“Russia and Siberia are huge, huge players. … Many of the (European Union-) and US-funded projects to work in Siberia to do any kind of lateral knowledge sharing, they’ve all been canceled.

“Will we stop trying? No, of course not. And there’s a lot we can do with existing data and with global remote sensing products. But it’s been a real setback for the community.”

Winter hibernation is for bears. Get out there and sweat this winter, whether “out there” is a weekend camping in

The holiday shopping season reaches its peak when Cyber Monday deals roll around. Sales are often better than on Black